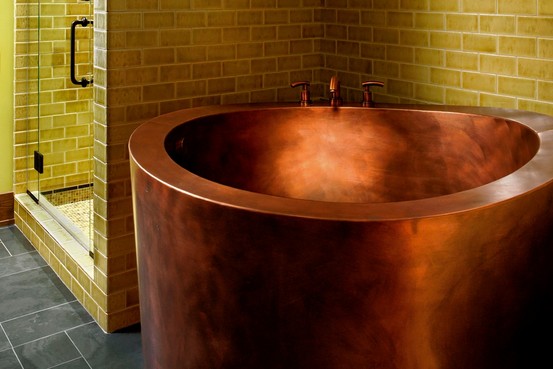 You can imagine our surprise and pure excitement when the Wall Street Journal came a callin’ a few weeks ago. A editor looking to write a story about our Japanese Tubs, our specialty, found out about us when we won BEST IN SHOW at the Architectural Digest Home Design Show in late March. Making these unique tubs for the past 13 years, and being one of the top manufactures in the world, we have made just about every kind of Japanese style bath available, although if you have an idea, bring it on-we love a challenge!

Here is the WSJ article that appeared yesterday..

The Swedish sauna, Turkish bath and Russian banya have some new competition in U.S. bathrooms: the Japanese ofuro.

Manufacturers are adapting the extra-deep soaking tub, used in Japan for a relaxing, meditative up-to-the-neck soak, for the U.S. market.

The U.S. arm of German bathroom-furnishings maker Duravit AG offers an extra-deep Japanese-inspired bath in its ‘Onto’ collection of wood-paneled bathroom sinks and vanities, designed by an Italian architect. “You have to get in it like you’re getting on a motorcycle,” says Tim Schroeder, president of the U.S. unit. “It’s a different kind of proposition” than Americans are used to. Sales of the tubs—which start at $1,500 and can climb up to $5,600—are 15% higher than expected, he says.

Requests for custom-made Japanese baths have grown as much as 30% a year over the past three years, according to Diamond Spas Inc., a Frederick, Colo., manufacturer. Prices run from $5,500 for a one-person, stainless-steel model to as much as $17,000 for a two-person copper model with accouterments including seats, a built-in heater, air jets and “mood lighting,” says marketing manager Krista Payne.

“Everyone is trying to make their bathrooms their little getaway now,” Ms. Payne says. “You see Asian influence in clean and simple lines.”

Kohler last year released the Japanese-inspired Underscore Cube. The dimensions—48 inches long, 48 inches wide and 34 inches high—suit the clean, contemporary designs that are currently popular, says Diana Schrage, a Kohler interior designer. Prices can reach as high as $5,479 with extras like a “vibracoustic” system, which plays music that bathers hear and experience as pleasant vibrations in the water.

Such bathroom bling is a far cry from the baths of traditional Japanese culture. In Japan, a person will have taken a cleansing shower, using a shower nearby, before entering the ofuro. “It’s a cherished act, to be able to sit in the bath and do nothing,” says Merry White, a professor of anthropology specializing in Japanese culture at Boston University. Family members typically take turns at an already-filled bath kept warm with a lid. In the U.S., bath water is normally slightly warmer than body temperature, which is 98.6 degrees Fahrenheit. In Japan, baths are much warmer than that, she says. 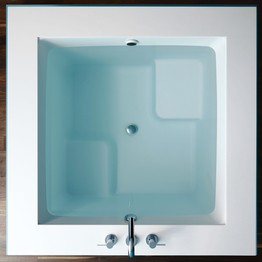 A Japanese-style tub concentrates water on a smaller footprint than an American tub, leading some homeowners to consider them only for ground level or below. Tub makers say a contractor should determine if structural reinforcements are required if installed on upper floors.

Ford Brown, 48 and a Boulder, Colo., veterinarian, was looking for a smaller tub in order to make room for a linen closet in his bathroom. He stumbled upon a compact Japanese soaking tub, which he says has transformed him from a morning-shower person to a nightly-bath taker—sometimes enjoyed alone or sometimes with his fiancée. The copper tub boasts air jets and a faucet that pours water from the ceiling—at a cost of about $10,000. “We’ve made an evening ritual out of it,” he says.

Get a FREE Quote