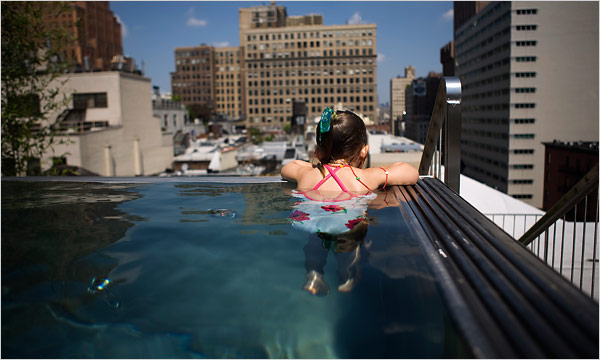 UP ON THE ROOF Mia Keiser, 3, in her family’s pool in TriBeCa in Manhattan, which has only about 100 private pools.

When Matthew Keiser and his daughter, Mia, needed to cool off with a swim the other day, they climbed to the roof deck of their pre-Civil-War loft in TriBeCa and plunged into their own sleek custom steel infinity pool whose disappearing edge seems to merge with the looming downtown towers of the city’s municipal acropolis.

Private pools, like the one Mia Jackson is enjoying in the Bronx, are uncommon sights in most parts of New York City.

Yes, Palm Springs disbelievers, New Yorkers also have their private pools, albeit mostly seasonal and now nearing their end-of-summer apotheosis. In-ground, above-ground or underground, inflatable or portable, behind fenced-in backyards, in alleyways, on high-rise terraces or tucked into billionaire penthouses, they are often invisible to the casual passerby, but not to air travelers who spot them winking in the cityscape below like shards of Navajo turquoise or Chinese jade.

“It’s like sometimes I say, ‘Is this real?’ ” said Louis Hernandez, a retired police officer, who excavated his backyard in Sunset Park, Brooklyn, with pick and shovel to build his gleaming blue 25-by-12-foot pool, carrying out the soil through his brownstone in five-gallon buckets.

New York City’s pools number certainly in the thousands, with the census in space-precious Manhattan — the unlikeliest of private swimming pool habitats — at close to 100, according to pool suppliers and property brokers.

That includes aquatic spectacles like the Keisers’s watery aerie, and the 48-foot-long top-floor indoor lap pool with workout gym of a TriBeCa neighbor, Steven Schnall, a venture capitalist and real estate developer, in another building, on North Moore Street.

Long celebrated is the Roman-style pool in the double-wide former Guccione Mansion at 14-16 East 67th Street, sold last year to the hedge fund investor Philip Falcone for a near-record $49 million. And no, said his spokesman, Charles V. Zehren, Mr. Falcone would not allow even a tiny peek.

Seen by viewers of “Sex and the City” but also off-limits to the idly curious is the legendary 12th floor rooftop pool lined with hand-painted blue Spanish tiles atop the soaring 11,000-square-foot triplex at 704 Broadway that the Israeli entrepreneur and architect Jonathan Leitersdorf sold in 2007 to the supermarket mogul Ronald Burkle for $17.5 million.

Lesser known is an indoor private pool at 3 East 94th Street, according to a former owner, and an eight-room duplex condo with private outdoor pool at 51 Walker Street whose occupants also declined a look, said the property’s agent, Edwin Cabrera.

But in Princes Bay, Staten Island — the most rural and pool-besotted of the boroughs — Frank D’Amato was proud to show off his extravagant saltwater pool with fountains and water slide where his children Rosina, 12, and Frank, 9, and their Yorkie, Chloe, frolicked alongside a brickwork piazza with a koi pond, TV screens visible from any angle, bar, grill and pizza oven.

“It started out as new kitchen cabinets and went a little out of hand,” said Mr. D’Amato, 47, a commodities broker, who estimated the project “sort of snowballed” to around $250,000. But he said, “I’m a pool fiend.”

You could say that too of Mr. Keiser, 37, a diver, sailor and marketing entrepreneur whose Internet startup LiveIntent connects fans and followers with brands and personalities onTwitter and Facebook and whose new stimulant snack, Perky Jerky, caffeine-infused beef jerky, is just reaching store shelves.

After buying half of the cast-iron 1857 Cary Building running along Church Street between 89 Reade Street and 105 Chambers Street, Mr. Keiser, inspired, he said, by his friend Mr. Leitersdorf, spent unspecified millions and three years in renovations, including about $500,000 on a 17-by-11-foot steel roof-deck pool with a current, designed by Diamond Spas in Frederick, Colo. To bear the weight, the roof was reinforced with 51-foot steel beams that had to be trucked in at night through a closed Lincoln Tunnel, at additional thousands billable to Mr. Keiser. “People say to me, ‘What, are you out of your mind?’ ” he said, shrugging. “Other people buy Ferraris.”

He and his wife, Adriana, and Mia, now 3, moved in last September, keeping the pool open and heated to 94 degrees through the winter. (They have since been joined by a son, Pax, now 9 months.) In the pool, they are visible to gawkers in surrounding buildings but say they don’t mind. “There’s no point in having all this if you can’t show it, right?” said Mrs. Keiser, a fashion executive.

The same afternoon, on Godwin Terrace in the Kingsbridge section of the Bronx, Mr. Jackson, 28, an unemployed father who lives with his mother, father and brother, hoisted his year-old Mia into a tube in their 12-foot round above-ground pool overlooking their backyard vegetable garden and a Rite Aid parking lot under the elevated train. “We got it last year at Target, on sale for $300,” Mr. Jackson said. Maintenance was reasonable, he figured — about $60 in chlorine tablets for the season. And come fall, he said, “there’s a drain in the parking lot; we’ll take it apart and put it back in the box.”

In the heights of Dongan Hills,, Paula Cecala also entertained a crew of splashing teenagers: her sons, Joseph, 18, and Anthony, 16, and their friends at her pool decorated with a mural of a Sicilian landscape. The week before, she and her husband, Glenn, an auto mechanic, had thrown Joseph a prom party for 100 classmates at the pool.

Elsewhere, the possibilities scale down. On 62nd Street in Sunset Park, Brooklyn, James and Kim Basile, schoolteachers, find their 12-foot collapsible backyard pool a welcome antidote to classroom pressures, despite maintenance headaches like the algae bloom from recent rains that turned the water green. As Ms. Basile struggled with a pool vacuum the other day, her husband called out helpfully, “Want me to get you the ladder, hon?”

There may be no more modest and beloved pool in the city than the 10-foot-round, blue plastic 30-inch high Intex model from Target in an alleyway on 36th Street in Astoria, Queens, where Michelle and Joe Mifsud, immigrants from Malta, and their children, Joey 13, Jared, 10, and Mary 7, splash around on hot days. “It’s enough to keep you cool,” said Mrs. Mifsud, a teacher.

Mr. Hernandez, 68, the retired police office in Brooklyn, said he had little idea what was in store when he decided 10 years ago to build his in-ground pool in the backyard of his brownstone on 45th Street.

Disdaining an excavator’s estimate of $2,000 as exorbitant, he decided, he said, to do it himself, recruiting Mexican workers and friends. It ended up costing him $2,400 for the hole, plus $12,000 for the pool installation and $800 for the brickwork and coping.

“It was worth every bucket,” said his wife, Carmen. Their grandson, Anthony, 10, had a particularly good time in the water this summer. “You don’t see too many pools like this,” Mr. Hernandez allowed. But he said, “if I had it to do over again, I wouldn’t do it.”

Get a FREE Quote